Trumped by a demagogue whose best word is 'stupid' 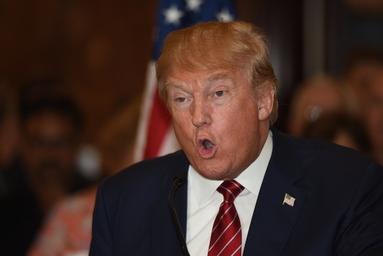 With Donald Trump’s wins in the Republican Presidential primaries, has the United States entered a new political dimension where voters are bamboozled by scattergun streams of simple verbiage, extremely loosely connected to truth?

The New York Times analysed 95000 words spoken by Trump in a single campaign week and found he “relies on potent language to connect with, and often stoke, the fears and grievances of Americans”.

He tends to attack the person rather than their ideas, frequently calling opponents “stupid”, “horrible” or “weak”. The newspaper quoted Jennifer Mercieca, an expert on American political discourse saying: “His entire campaign is run like a demagogue’s – his language of division, his cult of personality his manner of categorising and maligning people with a broad brush.”

Defending his choice of words at a South Carolina rally, Trump said: “I know words, I have the best words…but there is no better word than stupid.”

Georgetown University Associate Professor Jennifer Sclafani, who studies the way political identity is constructed through language, says Trump comes over as “incoherent” to a lot of people. She noted he failed to set the scene in telling particular stories. Her conclusion: “He’s turning political discourse into reality TV.”